The Ultimate Guide to Akka Interview Questions and Answers (2022)

In this post, questions from Akka Interviews will be answered for Experienced and Freshers. We're trying to share our experience and learn how to help you make progress in your career.

Akka is an open source and runtime toolkit running on the JVM. It's written in Scala (a language mostly used for concurrency purposes) so you can use Java code (or Scala) to call all of its libraries and functions.

Q: What is Akka Actor?
Ans:

Actors are objects that encapsulate state and behavior and communicate mainly through the exchange of messages that are put in the recipient's mailbox. Actors are message driven, stateful building blocks.

ActorSystem is a heavyweight model that allocates 1 ... N threads, which create one for each logical application.

If you know that all is done with your application, you can either stop the user guardian actor or call the ActorSystem terminate method. CoordinatedShutdown will stop all the running actors.

Q: What is Akka Props?
Ans:

Akka Props is a configuration class used to define options when creating an actor.

Akka actor are created by extending the Actor base trait and implementing the receive method.

Q: What is Akka Props?
Ans:

Props is a configuration class, which is used when creating an actor to define options.

Q: What is difference between Java 9 Reactive streams versus Akka Streams?
Ans:

Reactive streams are a feature in streaming with non-blocking backpressure for asynchronous data processing. They became part of the JDK in the java.util.concurrent package since Java 9.

Akka Streams is a library which uses bounded/limited buffer space to process and transfer a sequence of elements. This last property is the defining feature of Akka Streams that we refer to as boundedness.

Akka streams have been built over reactive streams such that the terminology are different but the workflow / feature is the same. 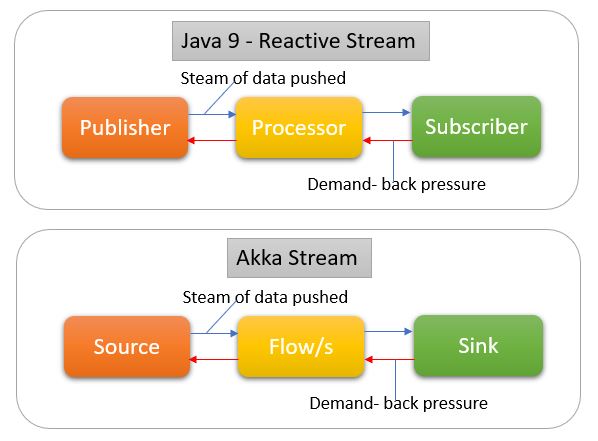