In this tutorial we will be looking at Drools Architecture, it's components.

Drools is a free and open source project licenced under the Apache License 2.0 and it is compatible with any JVM and available in Maven Central Repository also.

Drools are divided into two categories:

In this Drools tutorial, you will learn the following key aspects:

What is the Drool Rule Engine?

The working of Drools architecture is as follows: 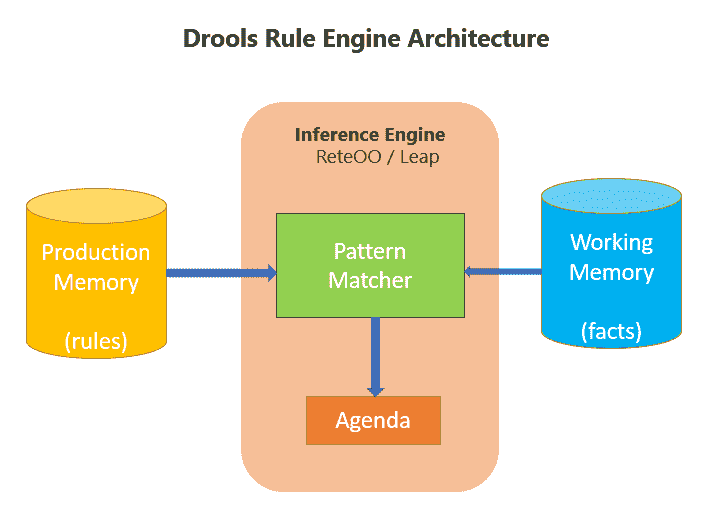 What is Drool Rule?

DRL (Drools Rule Language) rules are business rules that you define directly in .drl text files. A DRL file can contain one or more rules that define at minimum the rule conditions (when) and actions (then). The DRL designer in Business Central provides syntax highlighting for Java, DRL, and XML.
Syntax:

Pattern Matching, which is done by the Inference Engine, is the process of matching new or existing facts against Production Rules.

Algorithms used for Pattern Matching are:

However, the algorithm mostly used by Drools is the Rete Algorithm.

The Drools Rete implementation is known as ReteOO, and it denotes that Drools has improved and optimised the Rete algorithm for object-oriented systems.It uses node sharing to minimise or remove particular types of redundancy. While performing joins between different fact types, it stores partial matches.

Why to use Drools Rule Engine?

Below are the few Advantages of using Drools Rule Engine:

Here are some downsides of using a rules engine:

What is Backward vs. Forward Chaining?

There are two methods of execution for a rule system:

To begin, with forward chaining, we begin to analyze data and make our way towards a specific conclusion/decision.

For example, If you want to know who the top five students out of 100 were for a specific exam. Here we will take the data and then based on the analysis decide the results. This is forward chaining

We first take a decision and then check if the decision is true or not by backtracking through sequence of events or facts.

For example, If I want to know if a specific student has passed or not?
Then I'll take a decision that student has passed without first analyzing. Here, directly we decide the result and then back track to evaluate with data processing chain and as a result, determine whether or not the decision is right.