In this post, questions from reactJS Interviews will be answered for Experienced and Freshers. We're trying to share our experience and learn how to help you make progress in your career.

Its main purpose is to make it simple to reason about an interface and its state at any given time by splitting it into components.

Q: What are the advantages of using ReactJS?
Ans:

Q: What are the core concept of React ?
Ans:

Components: A string is a series of characters that are stored as UTF-16 Unicode code
JSX: It reflects the values of the number form. The numbers are stored as floating-point values in React
State: This can have values as true or false
Props: This can be a list of numbers together
Tuple: This data type allows users to create an array where the fixed number type elements are known but not the same.
Enum: This allows creating a user-defined data type.
Undefined: The Undefined type denotes all uninitialized variables.

It makes easier to create templates. JSX is a React extension which allows you to write XML-like syntax in the same file as your JavaScript code, and then a preprocessor (such as Babel) converts these expressions into actual JavaScript code. JSX tags have a tag name, attributes, and children, just like XML/HTML tags. It is type-safe, and most of the errors can be found at compilation time.

Without using JSX, we would have to create an element one by one as following :

Q: What is the Document Object Model (DOM) in ReactJS?
Ans:

The DOM (Document Object Model) handles an XML or HTML document as a tree structure, with each node representing a section of the document as an object. 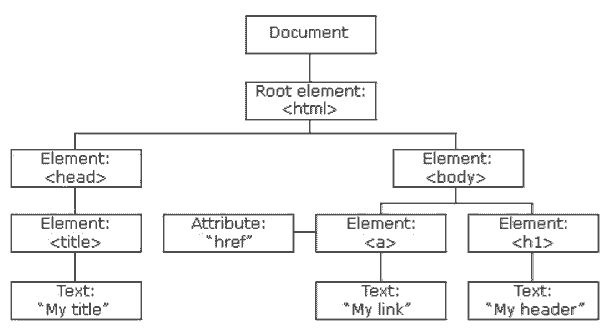 Q: What is Virtual DOM in ReactJS?
Ans:

Q: What is ReactJS component and what are different ways to create it?
Ans:

A render() function must be required for each reacting component.

We can create React component in two ways :

Q: What is Props in React?
Ans:

Props ("Properties" ) are read-only inputs to components, passed down from a parent component to a child component.

Q: What is state in React?
Ans:

A component's state is an object that contains information that may change over the component's lifetime. It's the heart of the react component, determining how it behaves and renders.
Refer Reactjs State Example for it's implementation.

Q: What is one-way data binding in ReactJS?
Ans:

Because React uses one-way data binding, everything stays modular and quick. When a developer creates a React project, they usually nest child components within parent components due to the unidirectional data flow. A developer can effectively manage the entire web application by knowing where and when an error occurs.

Q: How to debug the reactjs application?
Ans:

It's simple to test React apps because of the wide developer community. Facebook even offers a little browser extension that speeds up and simplifies React debugging.

For example, this Chrome extension adds a React tab to the developer tools menu. The tab allows for direct inspection of React components.

Q: What is React Native?
Ans:

React Native is a framework for creating user interfaces that combines the best features of native programming with React. It allows you to create mobile apps entirely with JavaScript. These mobile apps are available for download on the Google Play Store and the Apple App Store.

Q: What is Flutter?
Ans:

Google's Flutter is a cross-platform mobile app development framework. It allows developers to create and deliver visually appealing natively built apps for mobile (iOS, Android), web, and desktop from a single code base.

Q: What is the difference between Flutter and React Native?
Ans: