The Ultimate Guide to Kafka Interview Questions and Answers (2021) | TechGeekNext >>


The Ultimate Guide to Kafka Interview Questions and Answers (2021)

Without a doubt Kafka is considered to have been the ultimate choice of data processing pipelines over the years, the open-source message broker project developed by Apache Software Foundation.

Apache Kafka is quickly becoming the chosen messaging platform for a distributed messaging network which is unbelievably scalable. The ability to ingeste data at a lightening pace makes it an ideal option to create complex pipelines for data processing.

Kafka's success has brought a variety of work opportunities and career prospects around it.In this post, questions from Kafka Interviews will be answered for Experienced and Freshers. We're trying to share our experience and learn how to help you make progress in your career.

It was the idea of Jay Kreps, Neha Narkhede and Jun Rao, a group of LinkedIn engineers who were working on data streaming tasks. The event data from the LinkedIn websites and the entire infrastructure were ingested into the architecture of Lambda to be harnessed by Hadoop and other real-time processing systems.

The company has encountered low latency problems in the processing of real-time events during this process. Kafka's answer was. It was planned in 2010, and released in 2011. Using Kafka, LinkedIn was able to send large streams of message to clusters in Hadoop. It later became a project by Apache.

Q: What are challenges with traditional messaging system ?
Ans:

Q: What is difference between Message Oriented Middleware vs Kafka ?
Ans:

The main distinction between Message Middleware and Kafka is that consumers would never immediately receive messages. They have to explicitly ask for a message when they are ready to handle.

Until Apache Kafka was implemented, Message Oriented Middleware (MOM) such as Apache Qpid, RabbitMQ, Microsoft Message Queue, and IBM MQ Series were used to share messages across multiple components; While these products are ideal for the implementation of the publisher / subscriber (Publisher / Sub) model, they are not explicitly designed to handle large streams of data from thousands of publishers. Most of the MOM software has an asynchronous contact broker that discloses the Advanced Message Queuing Protocol (AMQP).

Kafka is built from the ground up to deal with millions of events created in rapid succession of firehose-style ones. It guarantees low latency, "at-least-once," delivery of messages to consumers. Kafka also advocates data retention for offline users, ensuring that the data can be stored in either real-time or offline mode.

Kafka is designed to be a distributed commit log, building further on the persistence and retention. Unlike relational databases, it can have a permanent record of all transactions which can be played back to restore a system's state. The main point to remember is that the data is stored in an order that can be deterministically read for long term. Kafka provides redundancy due to the distributed architecture which ensures high data availability even when one of the servers faces disruption.

The Kafka architecture consists of four basic components namely Brokers, Consumers, Producers and Zookeepers. The basic element is a Message which is actually a payload of bytes. Streams of messages belonging to a specific category is called a Topic. Each message is identified by its index called offset. 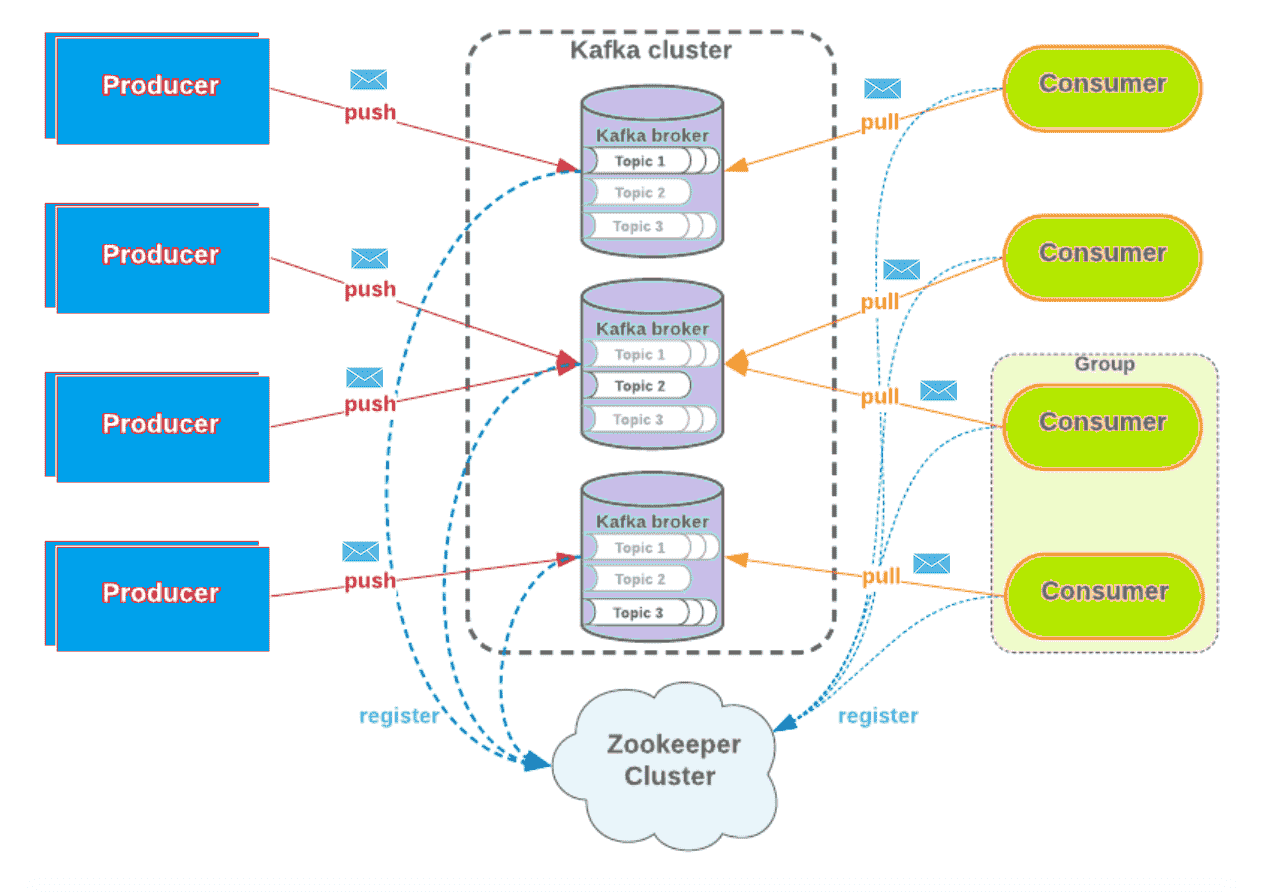 The queue messaging system is similar to publish-subscribe system. The only difference is that instead of one, consumers come in groups to pull data from partitions. They are segregated into groups and data is published.

Apache Kafka is a powerful distributed messaging system that is fault-tolerant and highly scable. For both publishing and subscribing, Kafka offers a high throughput. It supports multiple subscribers. At the same time, it efficiently balances consumers without failures and downtime. As messages are persisted on the disk, Apache Kafka is best suited for realtime applications as well as ETL (Extract, Transform and Load) operations

Here is an example of how Apache Kafka helps you to process streaming data in real time. Consider an instance wherein you have tomonitor trending twitter feeds and hashtags. You need a Kafka producer that collects data from Twitter, processes it, extracts hashtags and sends this data to the Kafka Ecosystem. You can install a data processing engine such as Apache Storm or Apache Spark.

Firstly, the Kafka producer collects data from the Twitter feed using the Twitter Streaming API. You can use any programming language to access the Twitter streaming API and get details of various subsets of public and protected Twitter data. You also need to sign up for a Twitter developer account. After signing up, you can get OAuth authentication details such as Customerkey, CustomerSecret, AccessToken and AccessTokenSecret. The Kafka producer can receive twitter feed and process it to extract hashtags. This information is sent to the Apache Storm/Spark ecosystem

Apache Kafka is used by some of the popular applications such as Twitter, Netflix, Oracle, Mozilla and LinkedIn.

Q: Why Kafka is better than other messaging systems?
Ans:

There are several messaging systems that are alternate to Kafka. RabbitMQ, ActiveMQ and ZeroMQ are some of the popular ones

Kafka output is far better than its competitors. For instance, Kafka producers doesn't wait for acknowledgements from the broker. They send messages as fast as the broker can handle. Moreover, Kafka storage format is more efficient than ActiveMQ and other systems. On an average, Kafka message overhead is 9 bytes wherein ActiveMQ message overhead is 144 bytes. This is because ActiveMQhas to manage various indexing structures. Another advantage is that there are no disk write activities on Kafka broker. RabbitMQ and ActiveMQ containers have to maintain the state of each message. Kafka reduces transmission overhead with sendfile API.