Q: What is RabbitMQ?
Ans:

RabbitMQ is an open-source message-broker software is also known as message queueing technology. It defines queues to which applications communicate for data transfer, or message transmission. Any kind of information could be included in a message. This message is processed by the recipient application.

Q: How RabbitMQ works, and it's Standard message flow?
Ans:

An exchange must accept messages from the supplier request and route them to message queues using header attributes, bindings and routing keys. A binding is set up to connect the queue to an exchange. 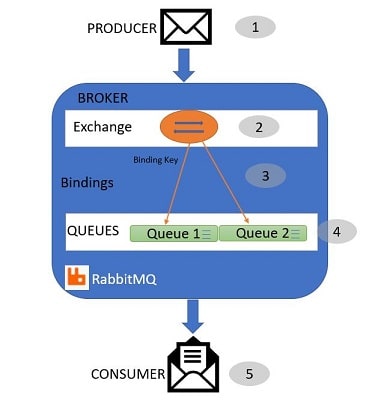 Q: When and why to use RabbitMQ?
Ans:

Message queueing is useful when you want to exchange a message for consumption or for balance of loads between workers with multiple recipients. The user is able to take a message from the queue while the producer is in the queue, and start processing. The consumer can be on a different server or on the same server than the publisher. The requested application can be of one language and the consumer application is of other language - the message broker would not care about the application languages, it just send messages between consumer and reciever. Which also reduces the dependencies or coupling between the application.


Q: How to integrate RabbitMQ with Spring Boot?
Ans:


Q: What Is binding And routing Key?
Ans:

A binding is a "bridge" that you set up to connect a queue to an exchange.
The routing key is an attribute message that the exchange examines when determining how to route the message to queues.


Q: What is a RabbitMQ channel?
Ans:

Q: What is a dead letter queue in rabbitmq?
Ans:

In general, a death letter queue (DLQ), also referred to as an undelivered-message queue, is a holding queue of messages that can not be sent to their destinations for some reason.
In rabbitmq, the dead letter queue is service implementation to store messages that satisfy one or more of the following failure criteria.

Whenever any data in the message is transmitted that the receiver does not accept, or when a message is sent to a queue that does not exist. The message is retried and sent up to a set number of times. Even if the communication is not received by the recipient but is sent from the sender's end. Now In such instances, the message queue is marked as undeliverable or deadLetter queue.

RabbitMQ provides a method for handling message failures in a really efficient way known as the Retry and Error Handling feature.

Q: How to install and configure RabbitMQ at local?
Ans:

Messages are not posted directly in the queue; rather, the user sends messages to the exchange. An exchange is responsible for routing the messages to the various queues. An exchange receives messages from the producer request and routes them by bindings and routing keys to message queues. A binding is a linkage between an exchange and a queue. 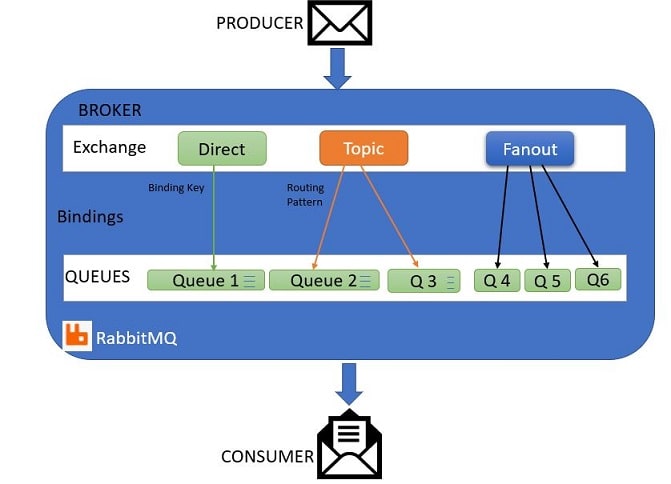 Q: How to integrate RabbitMQ with Spring Cloud Stream?
Ans:


Q: What is RabbitMQ Vhost?
Ans:

A Virtual Host (a.k.a. ' vhost ') in AMQP is a namespace for objects such as Exchanges, Queues and Bindings. RabbitMQ utilizes more concrete implementation of virtual hosts, through effectively making them "virtual clusters" on top of the broker.

RabbitMQ supports MQTT 3.1.1 through a plugin that ships to the core distribution.
Supported MQTT Features:

Having a queue durable is not same as making persistent messages. Messages can be distributed either with making mode to persistent or transient. When you post your message, you need to set the delivery mode to persistent if you want it to remain in your long-lasting queue during restart.

RabbitMQ intentionally does not store messages in a database. RabbitMQ writes messages to disk in below two ways:


Q: Does RabbitMQ is PUSH or PULL?
Ans:

RabbitMQ uses a PUSH template and prevents exhausting consumers through the prefetch configured limit. PULL is used by Kafka, where consumers request for messages from a particular offset batches.

Q: What is Dead Letter Exchange in Rabbitmq?
Ans:

If there is no appropriate queue for the message, the message will be dropped quietly. RabbitMQ offers an AMQP extension known as the "Dead Letter Exchange". The dead letter exchange provides features for collecting non-deliverable messages.

pub/sub messaging is a asynchronous service-to-service communication, it's a two way communication.
Mainly used in statelss, microservices. In this type of model, once message published to a topic, it gets received immediately by all subscriber to the topic.

Q: Is RabbitMQ an ESB?
Ans:

RabbitMQ is a messaging broker, whereas Mule is an ESB (Enterprise Service Bus). An ESB includes additional layers on top of a message broker like routing, transformations and business process management

As a strong messaging model transmitting messages among endpoints in the communication channel has many features / uses. It uses asynchronous architectural patterns to decouple applications.

Monitoring is a process of capturing behaviour of your application using health checks and metrics.
There are many tools available to monitors the application like AppDynamics,DataDog,AWS CloudWatch etc.

Q: What is Synchronous and Asychronous messaging.
Ans:

Q: Which Messaging patterns are getting used in RabbitMq?
Ans:

Messaging patterns are implemented in RabbitMQ on the basis of exchanges queues and bindings. We may distinguish between the different approaches to implementing a RabbitMQ design pattern: point-to-point communication publish-subscribe request-response communication

Q: What is Point to Point Communication?
Ans:

RabbitMQ is a lightweight message broker used to communicates messages between consumer and producer and it supports many protocols like AMQP, MQTT,STOMP. Whereas Kafka manages large amounts of data with very little overhead-Kafka was designed for large volumes of messages to be stored and distributed.
Refer Apache Kafka Tutorial to understand Kafka with example.

Q: What is Request-Response communication?
Ans:

Request–Response, or Request–Reply,is strong messaging patterns where requester send message to a replier, and in return replier send response back to replier.

Q: What is Erlang RabbitMQ?
Ans:

The RabbitMQ server software is written in the programming language of Erlang and is based on the clustering and failover architecture of the Open Telecom Framework.

To make the queue function as a priority queue, provide an x-max-priority property when the queue is established.
x-max-priority declares the maximum priority number in the queue.
In JavAns: Set priority as given below:
Publish messages of a particular priority,