In this post, questions from Openshift Interviews will be answered for Experienced and Freshers. We're trying to share our experience and learn how to help you make progress in your career.

Q: What is Cloud Computing?
Ans:

Cloud computing is providing on-demand computing resources, from applications to data centers around the internet.

Cloud computing has become the preferred way to deliver enterprise applications - and the chosen choice for companies to extend their infrastructure or introduce new technologies.

Q: What are benefits of Cloud Computing?
Ans:

Q: What are different types of Cloud?
Ans:

Based on a cloud location, we can classify cloud as:

Based on a service that the cloud is offering they can be classified as:

Q: What is OpenShift?

OpenShift is the RedHat Cloud Development Platform (PaaS) service. Its flagship product is the on-premises OpenShift Container Platform as a service built around Docker containers orchestrated and controlled by Kubernetes on a Red Hat Enterprise Linux base.

Free and open source cloud-based platforms allow developers to build, test and run their applications and deploy them to the cloud. 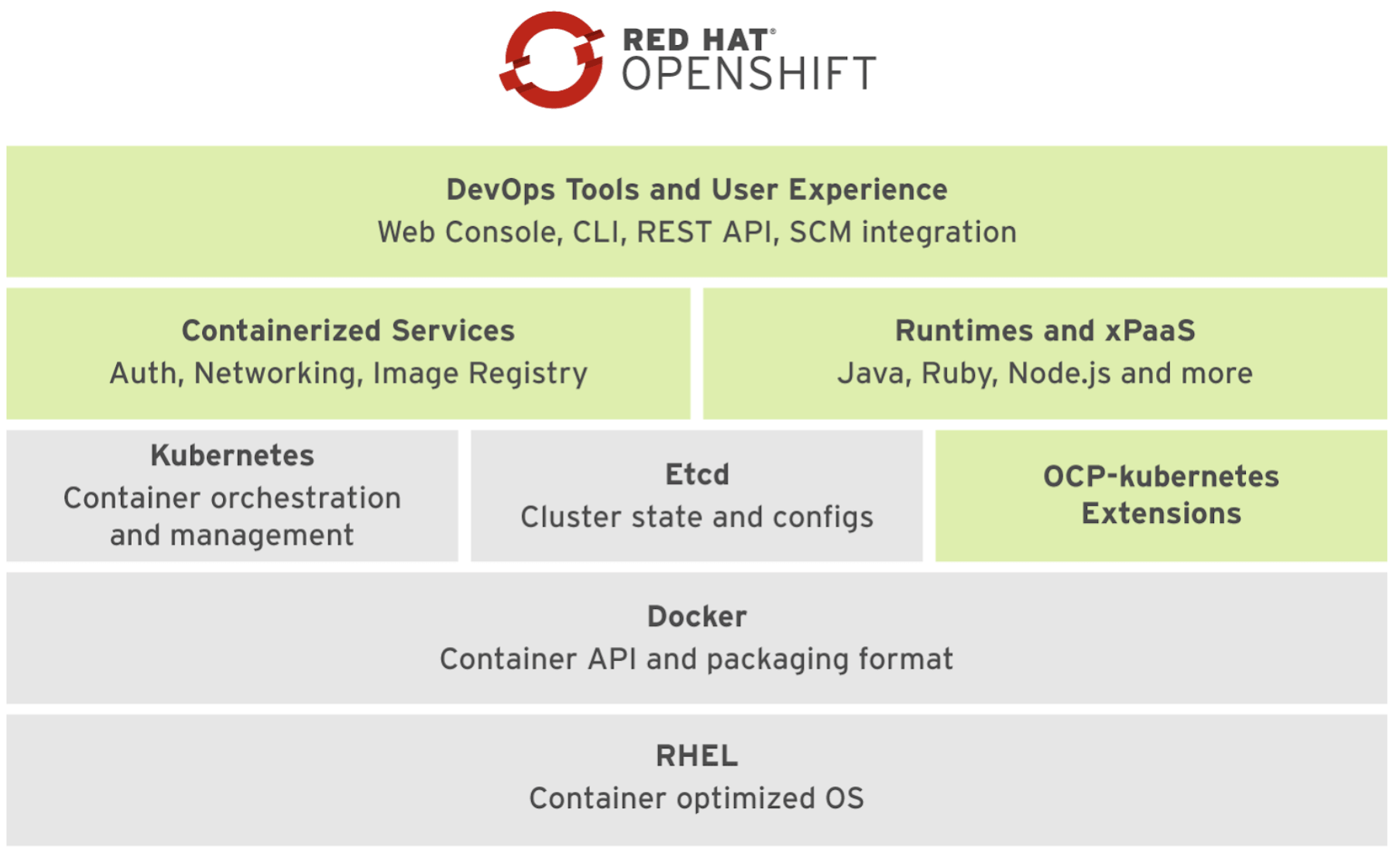 In the above figure, going from bottom to top, and from left to right, the basic container infrastructure is shown, integrated and enhanced by Red Hat:

Q: How to install OpenShift on Windows using Minishift?

You can refer this installation guide to setup Openshift environment for development and testing purposes using Minishift.

Q: What is Containerization?
Ans:

A container image is a lightweight, stand-alone, executable package of a piece of software that includes everything needed to run it: code, runtime, system tools, system libraries, settings.

Q: How to Fix VM VirtualBox Error- VT x is disabled in the BIOS for all CPU modes (ALL-VMX-DISABLED)?

Q: What is difference between Docker and OpenShift?

Q: What is containers Orchestration in Kubernetes?
Ans:

While containers are effective at the heavy lifting while instantiating an image or application component on a single hosting environment, most modern applications are comprised of many components that span multiple hosts that in turn could be in various geographic regions. This is where orchestration and management become a question.

Applications generally are built up of individually containerized components/micro services that must be managed for the application to perform as expected.

Q: What is in OpenShift Container Platform?

Q: What are Benefits of OpenShift?

Pods are the rough equivalent of a machine instance (physical or virtual) to a container. OpenShift leverages the Kubernetes concept of a pod , which is one or more containers deployed together on one host, and the smallest compute unit that can be defined, deployed, and managed.

The Kubernetes scheduling unit is the Pod, which is a grouping of containers sharing a virtual network device, internal IP address, TCP/UDP ports, and persistent storage. A Pod can be anything from a complete enterprise application, including each of its layers as a distinct container, to a single microservice inside a single container. Kubernetes manages replicas to scale pods. A replica is a set of pods sharing the same definition. OpenShift treats pods as largely immutable; changes cannot be made to a pod definition while it is running.

Q: What is OpenShift deployment?

Deployment in OpenShift is a replication controller based on a user-defined template called a deployment configuration. Deployments are manually created, or in response to triggered events. The deployment system provides the following:

Q: What Are Deployment Strategies?

A deployment strategy is a way to change an application or to update it. The goal is to make the transition in a way that the consumer barely notices the changes, without downtime. Using a blue-green deployment is the commonest technique.

Q: What Is Rolling Strategy?

Q: What Is Canary Deployments?

All rolling deployments in OpenShift Origin are canary deployments; it checks a new version (the canary) before replacing all the old instances. Unless the readiness test never works, then the canary instance and deployment will be disabled.

Q: What Is Routes In Openshift?

In OpenShift Routes is a way to externalize the services by providing externally reachable hostname. In OpenShift routes are created using routers developed by admin.

Q: Do you know the most important features of Openshift ?
Ans:

There are a lot of features offered by OpenShift. Here are a few main features :

Q: What Is Openshift Online?
Ans:

OpenShift online is an OpenShift community service that allows one to create, deploy and scale containerized applications on the public cloud quickly.

It is the development and hosting platform of Red Hat's public cloud platform, which enables automated provisioning, management and application scaling to help developers concentrate on the development of framework logic.

As the name suggests, PaaS (Platform as a Service) provides you with computing platforms which usually include the operating system, programming language execution environment, database, web server etc.