In this post, questions from Apache Flink Interviews will be answered for Experienced and Freshers. We're trying to share our experience and learn how to help you make progress in your career.

Q: What is Apache Flink?
Ans:

The Apache Software Foundation created Apache Flink, an open-source, unified stream-processing and batch-processing framework. Apache Flink is built around a distributed streaming data-flow engine written in Java and Scala. Flink runs every dataflow programm in a data-parallel and pipelined fashion.

The core principle of the Kappa architecture is to manage batch and real-time data via a single stream processing engine.

The Apache Flink job execution architecture is shown in the diagram below. 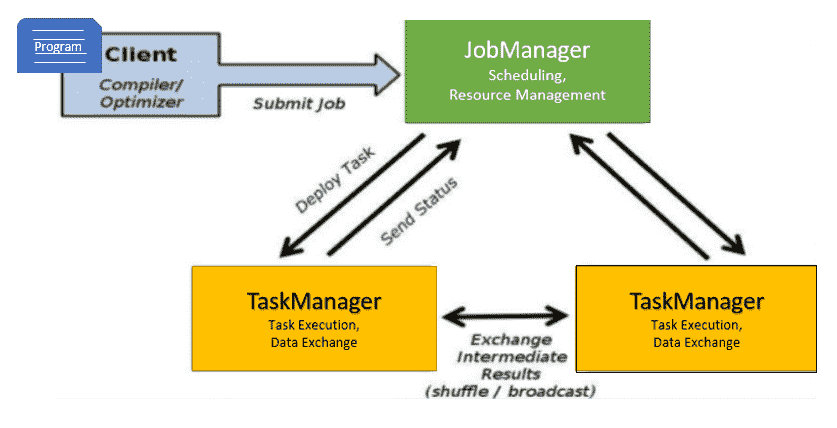 Q: What is Unbounded streams in Apache Flink?
Ans:

Any type of data is produced as a stream of events. Data can be processed as unbounded or bounded streams.

Unbounded streams have a beginning but no end. They do not end and continue to provide data as it is produced. Unbounded streams should be processed continuously, i.e., events should be handled as soon as they are consumed. Since the input is unbounded and will not be complete at any point in time, it is not possible to wait for all of the data to arrive.

Processing unbounded data sometimes requires that events are consuming in a specific order, such as the order in which events arrives, to be able to reason about result completeness.

Q: What is Bounded streams in Apache Flink?
Ans:

Bounded streams have a beginning and an end point. Bounded streams could be processed by consuming all data before doing any computations. Ordered ingestion is not needed to process bounded streams since a bounded data set could always be sorted. Processing of bounded streams is also called as batch processing.

Q: What is Dataset API in Apache Flink?
Ans:

The Apache Flink Dataset API is used to do batch operations on data over time. This API is available in Java, Scala, and Python. It may perform various transformations on datasets such as filtering, mapping, aggregating, joining, and grouping.

Q: What is DataStream API in Apache Flink?
Ans:

The Apache Flink DataStream API is used to handle data in a continuous stream. On the stream data, you can perform operations such as filtering, routing, windowing, and aggregation. On this data stream, there are different sources such as message queues, files, and socket streams, and the resulting data can be written to different sinks such as command line terminals. This API is supported by the Java and Scala programming languages.

Table API is a relational API with an expression language similar to SQL. This API is capable of batch and stream processing. It is compatible with the Java and Scala Dataset and Datastream APIs. Tables can be generated from internal Datasets and Datastreams as well as from external data sources. You can use this relational API to perform operations such as join, select, aggregate, and filter. The semantics of the query are the same if the input is batch or stream.

FlinkML is the Flink Machine Learning (ML) library. It is a new initiative in the Flink community, with an expanding list of algorithms and contributors. FlinkML aims to include scalable ML algorithms, an easy-to-use API, and tools to help reduce glue code in end-to-end ML systems. Note: Flink Community has planned to delete/deprecate the legacy flink-libraries/flink-ml package in Flink1.9, and replace it with the new flink-ml interface proposed in FLIP39 and FLINK-12470.

Q: What are the differences between Apache Hadoop, Apache Spark and Apache Flink?
Ans: