Q: What is Elasticsearch?
Ans:

Elasticsearch is a search engine that uses the Lucene library as its foundation. It offers a distributed, multi-tenant full-text search engine with an HTTP web interface and schema-free JSON documents.

Q: What are the key features of Elasticsearch?
Ans:

Here are some of Elasticsearch's main features:

Q: What is Elasticsearch Cluster?
Ans:

An Elasticsearch cluster is a set of nodes that all belong to the same cluster.name attribute. If you run a single instance of Elasticsearch, you have a cluster of one node. 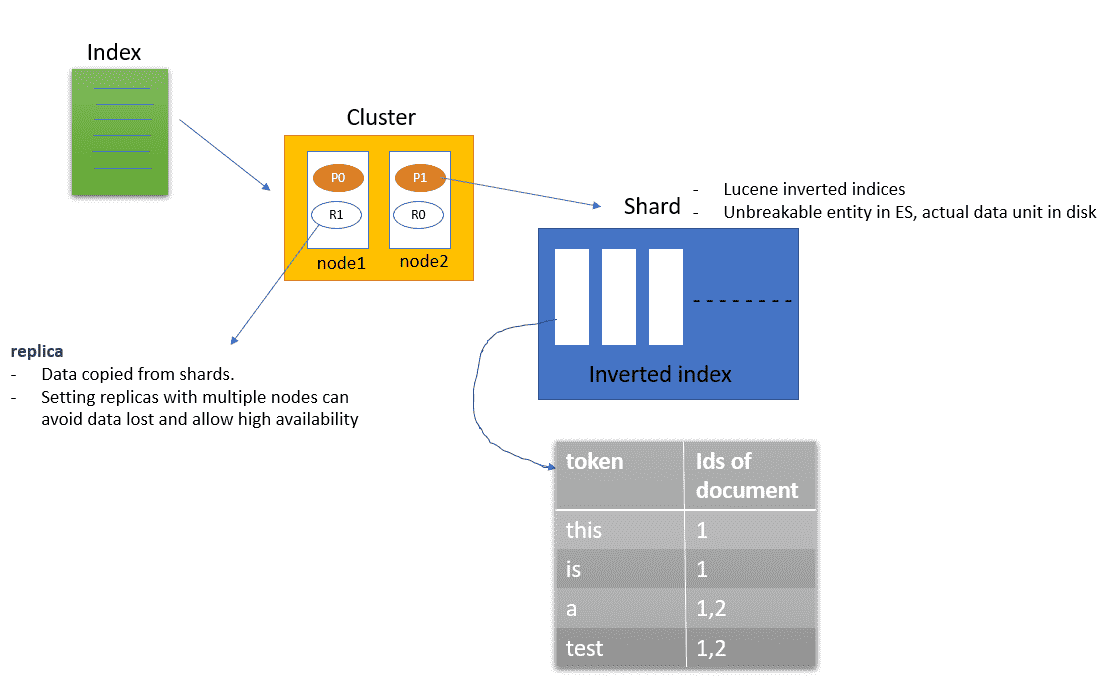 All primary shards are stored on a single node. Since no replica shards can be allocated, the cluster state remains yellow. The cluster is completely operational, but data loss is possible in the event of a failure.

Q: What is Node in Elasticsearch?
Ans:

A single server that is part of a cluster is referred to as a node. A node stores data and contributes to the indexing and search capabilities of the cluster.

Q: What are the different ways in which an Elasticsearch node can be configured?
Ans:

Elasticsearch nodes can be configured in below ways:

Q: What is Documents in Elasticsearch?
Ans:

Documents are the fundamental unit of information that can be indexed in Elasticsearch, and they are represented in JSON. Each document has a unique ID and a data type that defines exactly what sort entity it is.

Q: How do Indices works in Elasticsearch?
Ans:

An index is a grouping of documents with similar characteristics. In Elasticsearch, an index is the highest level entity against which you can query.
Elasticsearch collects unstructured data from various sources, saves and indexes it using user-specified mapping (that can also be obtained automatically from data), and make it searchable. Its distributed architecture enables it to search and analyse massive amounts of data in near real time.

Q: How many indexes can Elasticsearch handle?
Ans:

Elasticsearch shards are Lucene indexes. The maximum number of documents that can be stored in a Lucene index is 2,147,483,519.

Q: How do I get a list of all Elasticsearch documents from an index?
Ans:

In the above URL example, bookedItems is the index Name. This uses the Search API and will return all the entries under index bookedItems.

Q: What is Elasticsearch Inverted Index, and how it works?
Ans:

In Elasticsearch, an index is simply called an inverted index, which is the mechanism that all search engines use. It's a data structure that stores a mapping from content (like words or numbers) and their positions in a document or collection of documents. 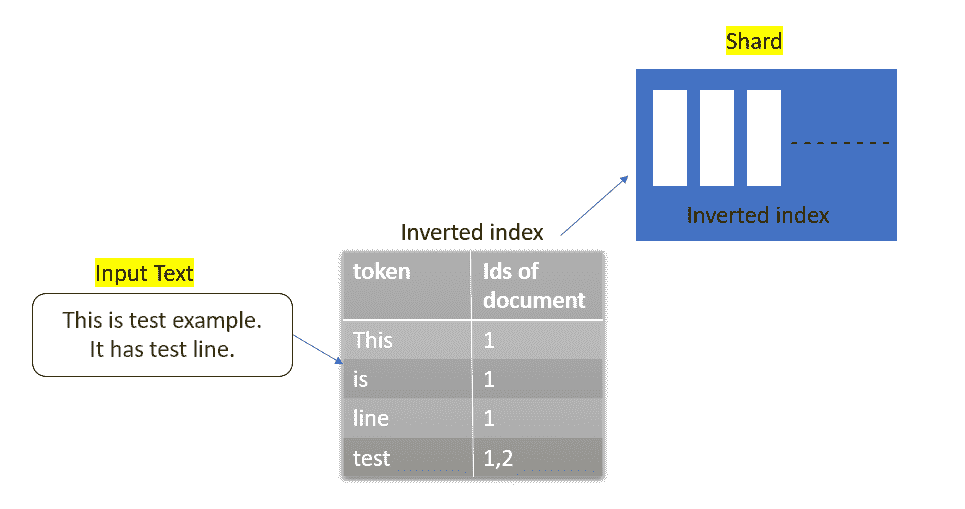 It's simply a hashmap-like data structure that flows from a word to a document. An inverted index doesn't really store strings directly, but rather divides each document into individual search terms (e.g each word) and then maps each search term to the documents in which those search terms appear.

For example, the term "test" appears in document 2 in the image below, so it is mapped to that document. This provides a quick reference for where to find search terms in a given document. Elasticsearch easily determines the best matches for full-text searches from even very large data sets by using distributed inverted indices.

Q: What is Shards in Elasticsearch?
Ans:

Elasticsearch allows you to break the index into several parts known as shards. Each shard is a completely functional and self-contained "index" that can be hosted on any node in a cluster.

Elasticsearch can ensure consistency by spreading the documents in an index across multiple shards and those shards across multiple nodes. This protects against hardware failures while also increasing query capacity as nodes are added to a cluster by making duplicate copies.

Q: What is Replicas in Elasticsearch?
Ans:

Elasticsearch helps you to create one or more copies of your index's shards, known as "replica shards" or simply "replicas." A replica shard is basically a copy of a primary shard. Each document in an index is assigned to a single primary shard. Replicas make duplicate copies of your data to protect against hardware failure and to improve ability for serving read requests such as searching for or retrieving a text.

Q: What is Elastic Stack (ELK) in Elasticsearch?
Ans:

Elasticsearch is the core component of the Elastic Stack, an open-source set of tools for data ingestion, enrichment, storage, analysis, and visualisation. It is generally known as the "ELK" stack, after its components Elasticsearch, Logstash, and Kibana, and now has Beats. Although Elasticsearch is primarily a search engine, users began using it for log data and needed a way to quickly retrieve and visualise the data.

Q: What is lucene in Elasticsearch?
Ans:

Elasticsearch is a search engine that uses the Lucene library as its base. It offers a centralized, multi-tenant full-text search engine with an HTTP web interface and schema-free JSON documents.

Q: What is Lucene query in Elasticsearch?
Ans:

Users of Kibana that do not want to use the Kibana Query Language can use Lucene query syntax.
The key reason for using the Lucene query syntax in Kibana is to take advantage of advanced Lucene features including regular expressions and complicated term matching. Lucene syntax, on the other hand, cannot scan nested objects or scripted fields.